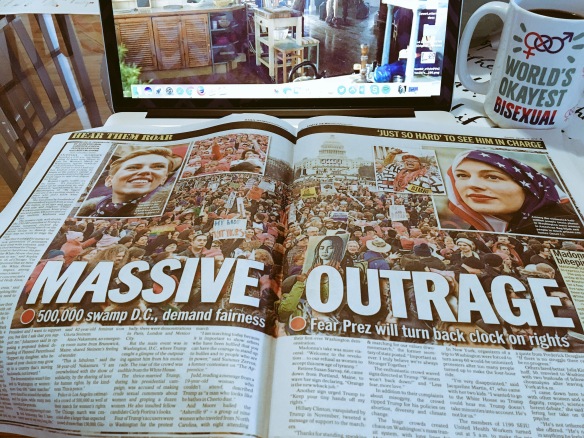 Saturday was the Women’s March in DC. I attended the one in NYC, one of the many, MANY sister marches being held around the world at the same time. 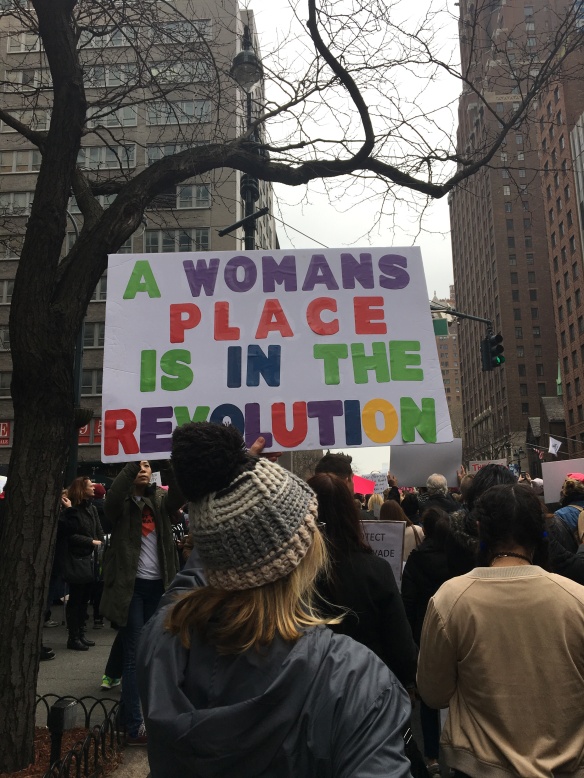 When the march was first announced, I didn’t think I needed to go at all. Sure, I was interested, but it seemed like a lot of work. Sure, I wanted to fight, but I could do that by making phone calls, right? (I’m inspired, but I’m also lazy). The more people talked about going and fighting, though, the more I began to seriously toy with the idea of going to DC. I had my college roommate who I could stay with, and buses from NYC to DC were decently cheap, so it was financially doable. But, I’m in a bit of a hole right now, so the responsible side of me won out and I told myself I didn’t need that extra pressure of maxing out my credit cards.

Fortunately, the Women’s March in NYC came up soon after, and I was able to find a good friend that wanted to come along. I knew a bunch of people that were going, but everyone was so scattered, marching for different groups and at different times, many of them with their own groups of friends or family members. I didn’t want to show up unless I had someone with me. I mean, even without knowing HOW huge this thing was going be, I knew it was going to be MASSIVE and crowded and the last thing I wanted to do was show up on my own.

Was it perfect? Not quite. I also didn’t have a sign, which I regret, because I was lazy and didn’t think I could make one. I wish I had brought one. But I’m writing this entry to talk about what I felt during this march, because I wanted to remember every amazing moment. And now I realize that whatever I write, I’ll feel like my words won’t do my feelings justice. For the first time since the election — the day I felt like everything about my life and future rested on a hopeless government — I felt HOPE. I felt positivity, optimism, love, and power. We were all there for the same reason, but no one wanted to make anyone’s life miserable. We just all wanted to make sure our voices were heard. We cared about our lives, and the lives and futures of ourselves, our siblings, our parents, our spouses, our friends, our grandparents, our children. Sure, it was disorganized (props to the organization for trying, at least; they couldn’t have predicted this massive turnout.) But it was peaceful. There was no yelling or pushing. Yes, people got cranky and loud and confused and angry, especially when we were all kind of stuck at a standstill for hours because no one knew where to move to. But no one got angry at each other.

HELL YES WE ARE

Because we knew we weren’t the enemy. We were all in this together. We didn’t vote for this man. We didn’t vote to be worried about our lives and futures and health and religion. We were banding together and we knew that it wasn’t going to result in any change at this very moment. But we knew we could create a MOVEMENT. It was a small way for me to feel like I was making a difference, but boy, did I feel like I was.

Rebellions are built on hope. We are stronger together. When the history books talk about the people that protested and marched and broke records, I’ll be able to tell my children I was there and be an example for them. I’m proud to be a woman, and even prouder to be a New Yorker. It’s moments like these that make me feel like we can get through the next four years, because we ARE nasty women. We are forces to be reckoned with, and we sure as hell won’t let anyone tell us what to do or who to bow down to.

at the 5th avenue route right by trump tower. CHECK OUT HOW FAR BACK THAT LINE GOES 🙂

If this is the first step at banding together to do some good, I’m more than willing to have faith in our country.